Yesterday (November 26, 2019), the news came out from the Hellenic Minister of Finance that Greece had completed its latest repayment of 2.7 billion euros to the IMF early (Source). They owed around 9 billion euros to the IMF. Greece had to go ‘cap-in-hand’ to its “European creditors” to gain permission to make the payment early, which they claim saves them crippling interest rate payments. The loans were locked in at 4.9 per cent per annum – usury rates by any definition. Celebration seems to be the message from the neoliberals. But, from my reckoning, the disaster for Greece continues. On September 30, 2019, the IMF European Director Poul Thomsem gave an extraordinary (for its shameless arrogance) speech on Greece at the London School of Economics. Entitled – The IMF and the Greek Crisis: Myths and Realities – Thomson admitted that the IMF had revised its date at which they think Greece will finally get back (in GDP per capita terms) to the pre-crisis level. When they devised these usury loan packages, they claimed that “it would take Greece 8 years to return to pre-crisis level”. Now, they have revised that projection to 2034 – yes, you read that correctly – a generation of waste and foregone opportunities. When you look at their own scenarios for a unilateral exit in 2012, it becomes obvious (and I have said this all along) that exit could not have been worse than what the Greek people are enduring and will endure for an entire generation.

By way of background, recall that Thomsen was the IMF’s architect of Greece’s original bailout.

I wrote about his performance in these blog posts:

1. IMF Euro hitman in denial of the reality that the monetary union has become (December 3, 2018).

His infamy comes from the leaked Teleconference on March 19, 2016 where he plotted with two other IMF officials to create an “event” that would bully the Greek government into submission in 2015.

The event that occurred The ‘event’ that brought Greece to heal in June 2015 was the ECB decision to starve the Greek banks of liquidity – in total violation of its charter to maintain financial stability within its jurisdiction.

How many Greek people lost income over that blackmail? How many took their own lives? How many plunged into mental illness?

There is little humility in the way he conducts himself today.

This graph appeared at the outset of Thomsen’s talk at LSE.

It shows various time profiles for Real GDP per capita (in index form) to show how bad the Greek situation actually is.

The peak is 100 and you can then trace out the path that followed in each situation.

Real GDP peaked in Greece in the March-quarter 2008. It is currently 23 per cent below that level.

The IMF is currently projecting that it will not get back to that level until 2034 – 26 years after the peak – more than a generation.

Thomsen told the LSE audience that:

When designing the program, we realized that the need for a sharp internal devaluation would cause a deep depression. In terms of GDP per capita, we assumed that it would take Greece 8 years to return to pre-crisis level. This was as bad as in the United States Great Depression in the 1930s, and considerably worse than the four years that it took countries affected by the Asian crisis.

The outcome was much worse. Today, almost ten years later, GDP per capita is still 22 percent below the pre-crisis level.

If you go back through the IMF documents during the GFC, you will see no reference to knowledge that the “sharp internal devaluation would cause a deep depression”.

For example, even in March 19, 2012 document – Request for Extended Arrangement Under the Extended Fund Facility – we read things like:

1. “a prolonged and deepening recession” – which is not a “deep depression”.

3. The word “depression” is not found in the document.

So they knew but tried to sugar coat the damage they were inflicting through coercion on the Greek nation.

In that 2012 document, the IMF asserted that “An alternative approach centered on euro exit would be very costly, especially if attempted unilaterally without external support”.

1. The currency would depreciate.

2. Private sector savings would be destroyed.

4. “deposit outflows that could be contained only with controls” – and, of course, the IMF had not yet admitted that capital controls are beneficial for a nation whose currency is under speculative attack – they have subsequently admitted that. 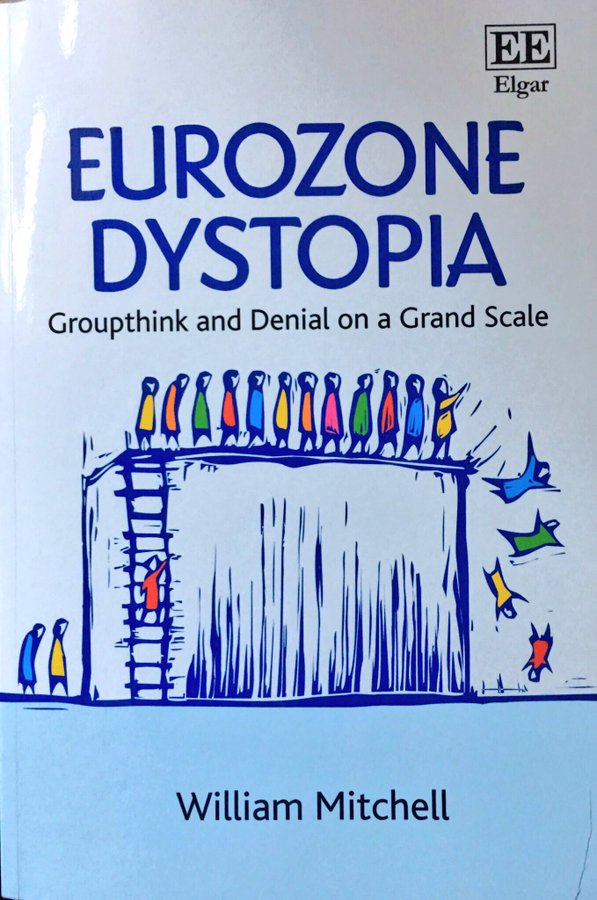 In my 2015 book – Eurozone Dystopia: Groupthink and Denial on a Grand Scale – I argued that a unilateral exist would be less costly than remaining in the Eurozone and being subjected to these harsh austerity packages.

A lot of Europhiles criticised me for that.

I stand by that assessment.

Interestingly, in the 2012 IMF document (Box 2), there are some simulations of what an exit would look like in terms of lost real GDP etc.

They presented this graph, which shows the Real Exchange Rate, the GDP deflator (a measure on inflation) and Real GDP under the baseline (as is) scenario and their Eurozone exit scenario.

The analysis suggests that the IMF considered:

1. Real GDP growth would be positive under the unilateral exit option by 2014, would spike upwards to around 5 per cent by 2016 and then settle down to about 2 per cent per annum.

2. Inflation would spike then by 2020 be very low and stable.

If we consider that exit scenario against what has actually happened then the reality has been much worse than what the IMF thought would happen under an exit strategy.

Real GDP growth was negative through to 2017 and has never gone close to the 5 odd per cent projected under an exit.

If I simulate the IMF’s exit projections and compare them to the actual trajectory that Real GDP has followed for Greece, by 2019, the nation is better off under exit.

Further, the assumptions that the IMF made about the exit consequences were on the pessimistic side (extreme).

If the Greek government had have used its fiscal capacity to effect, then the collapse projeced in the first two years of exit would not likely have occurred.

Growth could have been immediate.

Anyone who continues to claim that exit would have delivered a worse long-term outcome than what the IMF are now projecting – a 25-year period of losses compared to the peak achieved in the March-quarter 2008 – is kidding themselves.

Why did the IMF get it so wrong?

Thomsem admits now that the IMF:

But he then goes on to blame the Greek authorities for not being willing enough to cut deeply enough – “there was no broad political support for the program from the outset.”

Apparently, this resistance meant the imposed cuts had to be larger.

He also claims that “Greece’s European partners made things worse” and led to “a dramatic flight from the banking system and virtual collapse in investments.”

In the face of a collapsing economy and a population that was exiting to find work elsewhere, Thomsen now considers the Greek situation:

… was as much, if not more, a political than an economic crisis.

Apparently, the IMF trusted the Greek political system too much and that system is weak and cannot keep its word.

1. Real GDP grew by 0.8 per cent in the June-quarter and 1.9 per cent on an annual basis, driven mostly public consumption and net exports.

3. But, household consumption fell by 0.4 per cent in the June-quarter and 0.7 per cent over the year.

4. And capital formation (investment) fell by 5.5 per cent in the June-quarter.

5. The unemployment rate is at 17 per cent (down from 19.1 per cent over the year) but as I show in the next section, this is a misleading figure because of the decline in the population.

The first graph shows the real GDP Index (quarterly seasonally adjusted data from Hellenic Statistical Authority) from the peak in the March-quarter 2008 to the June-quarter 2019 (latest available).

This is what the European Commission and the IMF have referred to as a recovery and a vindication of their policy position on Greece.

Real GDP has shrunk by 23.3 per cent since the crisis began and has been stuck around that mark since 2012.

The next graph shows the evolution of real GDP, private consumption and gross fixed capital formation (investment) from the peak in the March-quarter 2008 to the June-quarter 2019 – more than 11 years of travail for the Greek nation.

Private consumption spending is now by 24 per cent lower than it was when Greece entered the crisis. It remains below the level of the June-quarter 2012 and has been static for the best part of two years.

Moreover, investment spending (capital formation) has fallen by a staggering 63.2 per cent and is showing no signs of recovery.

The decimation of Greece’s productive capacity is thus on-going.

The other thing to note is that despite all the on-going ‘internal devaluation’ cutting wages, pensions and labour costs in general, allegedly to increase the international competitiveness of the nation, the external sector is still contributing negatively to growth. Even though the export index has risen in the last two years, imports are also rising – at a faster rate.

In this blog post – The EU pronouncement of a Greek success ignores the reality (August 22, 2019) – I presented some demographic analysis for Greece.

The summary results were:

4. If the GFC and subsequent fiscal austerity had not destroyed the nation, and the working age population continued to steadily grow, then in the June-quarter 2019 it would have been 9,833.6 thousand, instead of the actual amount of 9,117.3 thousand – a difference of 716.3 thousand workers.

6. So not only has the working age population shrunk by 320 thousand in actual terms (3.4 per cent), the proportion of that population actually in the labour force is now much lower.

7. Had the working age population grown steadily and the participation rate not collapsed, the labour force would have been 5,211.8 thousand in the June-quarter 2019, rather than the actual size of 4,721.1 thousand. That is, 490.7 thousand workers extra would be in the labour force.

That is how bad things have become in Greece courtesy of the IMF and its Troika partners.

(1) The available statistical indicators all point to the same conclusion – after engineering a Depression, the managers of Greece (the colonial masters) have put it into a holding pattern of stagnation allowing some growth to percolate through on the back of generalised global growth.

(2) They cannot claim that prosperity is just around the corner with current policy structures in place.

(3) There is no way that a unilateral exit would have been as costly as this catastrophe.