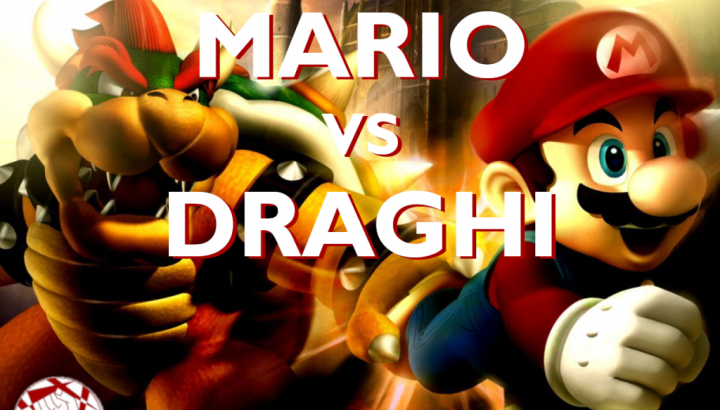 (i) Mario Draghi is no saviour1

Why would the bodily incarnation of neoliberalism represent a solution to Italy’s woes?

1  Why would anyone choose to drag an immaculate, larger-than-life reputation through the blood, sweat and tears of day-to-day Italian politics? That’s the question on many lips as Mario Draghi, former ECB chief, unveils his new cabinet in preparation for his role as the country’s next prime minister. After all, he only had another year to wait before scooping up the seat of new president of the Republic.

Was it, as left-leaning commentators and supporters of the former PM argue, because Matteo Conte’s government’s timid social-interventionist measures incurred the wrath of the country’s business and financial elites? Or was it just a power play by Matteo Renzi gone terribly wrong?

I actually think it most likely that Conte was not considered by those elites to be strong enough to manage the “great reset” of Italy’s economy, an endeavour that can only be pulled off by a “technical” — or technocrat-led — government. But more interesting than the speculation about how he got here is what the prospect of a Draghi government tells us about the nature of Italian (post-)democracy, and the perverse effects that the euro has had on the country’s economic, social and political fabric.

Draghi’s descent into politics has been accompanied by feverish cries of jubilation by the mass media — on a level that would have probably embarrassed North Korean state media. And virtually all parties in Parliament— including Salvini’s Northern League, which seem to have jettisoned what little was left of its “eurosceptic” posturing — have expressed support. The tone of the discussion was captured well by the powerful governor of the Campania region, Vincenzo De Luca (PD), who compared Draghi to “Christ” himself.

Nearly everyone seems to agree: a Draghi government would be a blessing for the country, a final opportunity to redeem its sins and “make Italy great again”.

Such prophecies aren’t based on an analysis of what Draghi’s policies may actually be — and whether they would be in the interest of the country and its citizens, workers and businesses — but on vague references to the man’s “charisma”, “competence”, “intelligence” and “international clout”. This is a reflection of a sick political culture, whereby statecraft is reduced to a purely technical affair, in which notions such as power, class, ideology are erased from the equation. Instead, they are seen as inconvenient hindrances to the “efficient” management of government, which only requires the “expertise” of well-studied (and politically neutral almost by definition) “technicians” or technocrats.

This concept is well summed up by the notion of “technical government”, which most non-Italians readers are likely to be baffled by. Indeed, the concept doesn’t exist in nearly any other Western country. The basic idea is that in moments of deep crisis only “experts” supposedly untainted by political partisanship and unburdened by the complications of parliamentary politics can be trusted with making the “right” and “necessary” decisions.

It’s a concept that, alas, has a long-running history in Italy. It harks back to the fraught relationship the country’s economic elites have always had with mass social democracy, and how they sought to resolve this tension by resorting to self-imposed “external constraints” of various nature. Throughout the 1970s and 1980s, Italy’s ruling elites were faced with an increasingly militant and “ungovernable” working class and a state-centric, redistributive political economy (grounded in the country’s socialist-leaning Constitution) that was deeply incompatible with the emerging neoliberal paradigm.

They thus began to theorise that only by “tying the hands” of government via a political-economic straitjacket — an external constraint or vincolo esterno — could they hope to achieve a dual objective. Their aim was to essentially “break the back” of the working classes while spearheading those “reforms” for which there was very little popular consensus. And that vincolo esterno was, of course, the process of European integration, beginning with the system of semi-fixed exchange rates known as European Monetary System (EMS), in 1979, all the way up to Maastricht and then the euro (EMU).

One of the main advocates of the vincolo esterno was Guido Carli, Italy’s highly influential economic minister from 1989 to 1992, not to mention one of the mentors of Mario Draghi. In his memoirs Carli made no secret of the fact that “the European Union represented an alternative path for the solution of problems which we were not managing to handle through the normal channels of government and parliament”. Namely, the wholesale transformation, or neoliberalisation, of the country’s political economy. This can be said to embody what Edgar Grande calls the “paradox of weakness”, whereby national elites transfer some power to a supranational policymaker (thereby appearing weaker) in order to allow themselves to better withstand pressure from societal actors by testifying that “this is Europe’s will” (thereby becoming stronger).

The concept of “technical government” is largely a by-product of the vincolo esterno. On the one hand, the apparently inexorable logic of the external constraint — be it the maintenance of a fixed exchange rate or the need to appease “markets” or “the EU” in order to avoid retaliation — creates a semi-permanent “state of exception”. This means that at any moment the complex dynamics of parliamentary politics may need to give way to “non-political” (i.e., “technical”) governments tasked with “getting the job done”.

Such a move implies that the policies they carry out are not a political choice but something entirely rational and necessary, which Parliament should limit itself to rubber stamping without asking too many questions. On the other hand, the socio-economic effects of the external constraint — particularly disastrous in Italy’s case — create growing tensions between the demands of citizens and the requirements of the external constraint (plus the inter/supranational institutions overseeing it). National parties are unable to resolve these because they lack all the “normal” instruments of economic policy necessary to maintain societal consensus. Which then leads them to turn to technocrats to resolve the impasse, by having them implement the measures the parties don’t want to take responsibility for.

It’s no coincidence that the era of the technical governments begins in the early 1990s, following Italy’s signing of the Maastricht Treaty, which was negotiated by none other than — you guessed it — Mario Draghi, at the time director general of the Italian Treasury. The first technocrat-led government, led by former governor of Italy’s central bank, Carlo Azeglio Ciampi, was formed in 1993 and inaugurated the first round of mass privatisation of state assets. Just a few years later, it was the turn of Lamberto Dini, prime minister between 1995 and 1996.

Throughout this entire period, Draghi, in his capacity as director general of the Treasury, was one of the main proponents of the privatisation of Italy’s state-owned companies, and of the vincolo esterno in general. The fall of Berlusconi’s last cabinet, in 2011, saw the ushering in of another technocrat, Mario Monti, former European commissioner and an international advisor to Goldman, who proceeded to administer a devastating austerity “cure” recommended by Brussels. This was largely a consequence of the decision by the newly-appointed president of the ECB – yes, Mario Draghi again – to stop the purchases of Italian government bonds, which caused Italian interest rates to skyrocket.

In short, either in his capacity as director general of the Treasury or president of the ECB, Draghi oversaw mass privatisation, severe public spending cuts and tax hikes that all had a deleterious impact on Italy.

The experience of the Monti government is a perfect case in point: the healthcare cuts administered by Monti, as well as other administrations, and demanded by the European Commission, left the Conte administration dramatically ill-prepared to fight the Covid-19 outbreak. The architecture of the euro continued to impede an efficient response, despite extensive central bank support and the temporary suspension of the EU’s budget rules. This led to mounting economic and social costs, and ended up placing a growing strain on the government — an impasse that we are now told can only be solved by yet another deus ex machina technocrat.

This is madness. There is little doubt that Italy’s crisis must be regarded as a crisis of the post-Maastricht order of Italian capitalism, and more in general of the logic of the external constraint based upon privatisation, fiscal austerity and wage compression. This hasn’t just entailed the permanent stagnation of Italy’s economy but has also had the effect of disarticulating the normal functioning of democracy. If that is the case, then it is folly to think that Mario Draghi — literally the bodily incarnation of the political-economic model that has ruined Italy — can represent a solution.

Draghi didn’t just directly oversee the dismantling of Italy’s public industry and application of severe austerity in the early 1990s during his position at the Italian Treasury. He also fine-tuned the external constraint itself by spearheading the transformation of the euro system. It changed from a dysfunctional but formally democratic monetary union into an inter/supranational governance structure where governments are punished through a complex array of institutional mechanisms.

A system in which the formal democratic process itself is systematically subverted through financial and monetary blackmail — first and foremost at the hands of the ECB — to the point that one may reasonably question whether euro area member states can still be considered democracies. Even according to the narrow “bourgeois” understanding of the concept, one would certainly be hard-pressed to still consider Italy as such. Especially now that Mario Draghi has been called in to finish the job he began 30 years ago.