Exclusive: The Military Knew Years Ago That a Coronavirus Was Coming

The Pentagon warned the White House about a shortage of ventilators, face masks, and hospital beds in 2017—but the Trump administration did nothing.

EDITOR’S NOTE: The Nation believes that helping readers stay informed about the impact of the coronavirus crisis is a form of public service. For that reason, this article, and all of our coronavirus coverage, is now free. Please subscribe to support our writers and staff, and stay healthy.

Despite President Trump’s repeated assertions that the Covid-19 epidemic was “unforeseen” and “came out of nowhere,” the Pentagon was not just well aware of the threat of a novel influenza but even anticipated the consequent scarcity of ventilators, face masks, and hospital beds, according to a 2017 Pentagon plan obtained by The Nation.

“The most likely and significant threat is a novel respiratory disease, particularly a novel influenza disease,” the military plan states. Covid-19 is a respiratory disease caused by the novel (meaning new to humans) coronavirus. The document specifically refers to coronaviruses on several occasions, in one instance saying, “Coronavirus infections [are] common around the world.”

Titled “USNORTHCOM Branch Plan 3560: Pandemic Influenza and Infectious Disease Response,” the draft plan is marked for official use only and dated January 6, 2017. The plan was provided to The Nation by a Pentagon official who requested anonymity to avoid professional reprisal.

Denis Kaufman, who served as head of the Infectious Diseases and Countermeasures Division at the Defense Intelligence Agency from 2014 to 2017, stressed that US intelligence had been well aware of the dangers of coronaviruses for years. (He retired from his decades-long career in the military in December 2017.)

“The intelligence community has warned about the threat from highly pathogenic influenza viruses for two decades, at least. They have warned about coronaviruses for at least five years,” Kaufman said in an interview.

“There have been recent pronouncements that the coronavirus pandemic represents an intelligence failure…. It’s letting people who ignored intelligence warnings off the hook.”

In addition to anticipating the coronavirus pandemic, the military plan predicted with uncanny accuracy many of the medical supply shortages that will now apparently soon cause untold deaths.

The plan states, “Competition for, and scarcity of resources will include…non-pharmaceutical MCM [medical countermeasures] (e.g., ventilators, devices, personal protective equipment such as face masks and gloves), medical equipment, and logistical support. This will have a significant impact on the availability of the global workforce.”

The 103-page response plan provides an overview of what might cause a pandemic, likely complications, and how the military might respond. The plan outlines conditions under which an infectious disease can become a pandemic, several of which were at play with Covid-19: crowded workplaces, proximity to international airports, unsanitary living conditions. It also contains references to classified annexes that go into further detail. (The Nation is not in possession of these annexes.)

Last week, Trump lashed out at General Motors and Ford on Twitter, demanding that they manufacture ventilators, a life-or-death appliance for many people with acute Covid-19 symptoms.

The military plan also correctly anticipates “insufficient hospital beds.” Indeed, hospitals are in critically short supply in Italy and are rapidly filling up across New York.

“Even the most industrialized countries will have insufficient hospital beds, specialized equipment such as mechanical ventilators, and pharmaceuticals readily available to adequately treat their populations during clinically severe pandemic,” the report goes on.

Another prediction in the report anticipates worldwide competition for and scarcity of Covid-19 vaccines. Trump has already reportedly offered German scientists large sums of money for exclusive rights to a vaccine, and efforts to develop drugs are underway in several countries.

The Pentagon did not immediately respond to a request for comment.

You can read the Pentagon’s full draft pandemic plan below. 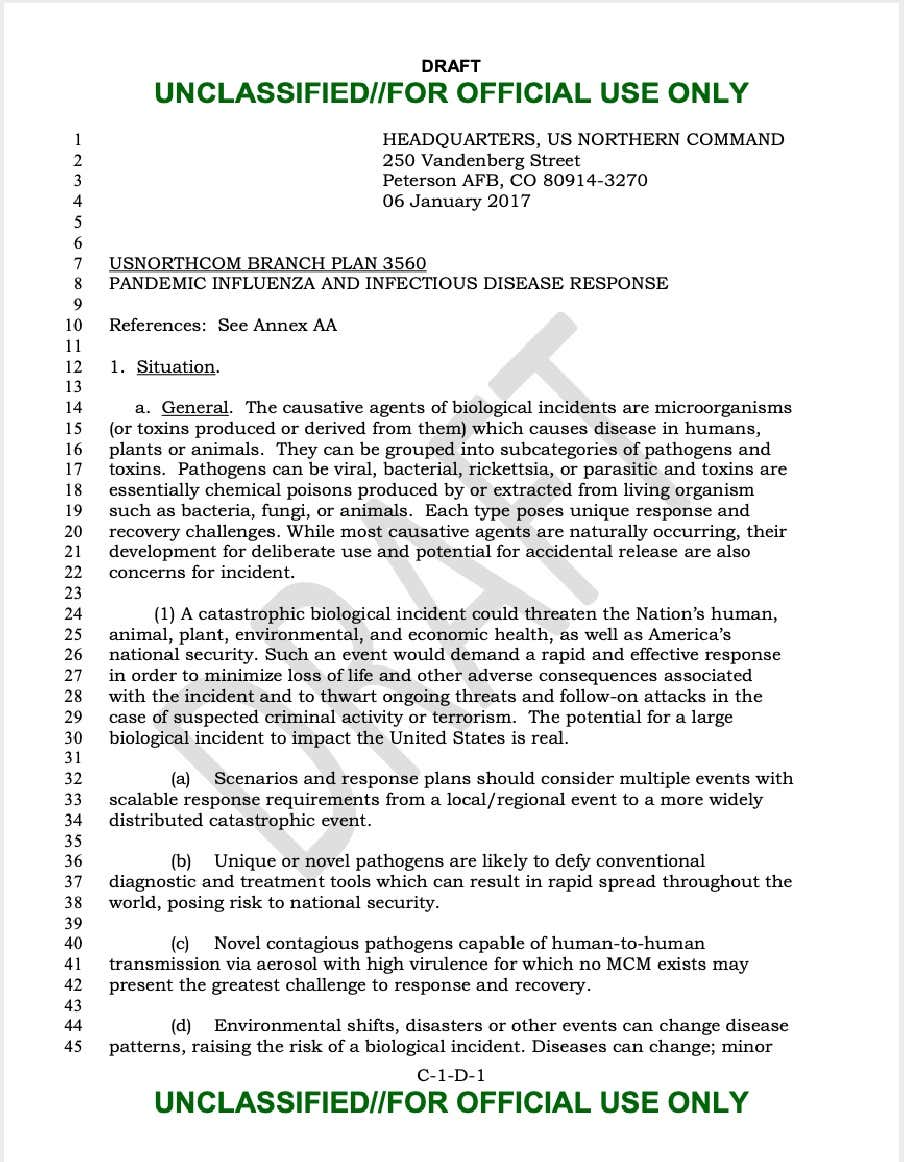