There’s absolutely nothing new in the EU’s approach. It’s the same one that was adopted in the aftermath of the financial crisis: increased deficits/debts to socialise private losses. We know how that ended.

As of today, the @ecb DOES simply allow all countries to pursue their autonomous fiscal policy – the fantasy has come true. The question is what happens when the crisis is over (2021). My guess: PEPP is made permanent and the deficits will be increased and made dynamic.

Well. Why should we? The ECB has a stellar record to let member states hang out in the dry to please the Germans once any immediate danger to the #Eurozone is over. 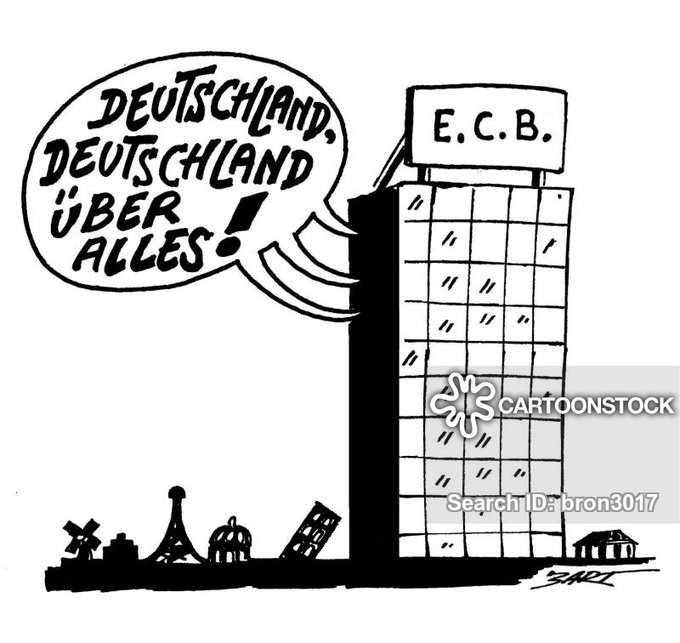 The coronavirus is shattering many neoliberal myths – but we should we weary of pronouncing neoliberalism dead. An article of mine for @unherd

The global pandemic has shattered every neoliberal shibboleth — starting with the idea that money is a scarce resource | @battleforeurope https://unherd.com/2020/04/could-covid-19-vanquish-neoliberalism/

Over the course of just a few months, the Covid-19 global pandemic has shattered practically every shibboleth in the neoliberal bible.

The first and most obvious victim is the idea that money is a scarce resource. In recent years, any proposal for economic redistribution and increased welfare spending — such as those championed by Corbyn in the UK and Sanders in the US — has been met with the same smug question: “How are you going to pay for that?”. Even worse, the standard response of Left-wing politicians has been to contrive elaborate funding plans to prove that their programmes were ‘fully-costed’, rather than to challenge the mainstream narrative. For as long as most of us can remember, the entire debate around fiscal/budgetary policy has been based on the assumption that the government’s budget is like that of a household or private firm.

When David Cameron said in 2011 that “if you have maxed out your credit card, if you put off dealing with the problem, the problem gets worse”, he was inferring that the government deficit is just like credit card debt and that a country that racks up too much debt will end up facing bankruptcy, just like an individual or business. This logic has been used — in the UK and elsewhere — to justify vicious slash-and-burn austerity policies (including budget cuts to healthcare, education and other social services) which have punished the weakest and most vulnerable in society, resulting in 120,000 excess deaths in the UK alone.

The coronavirus crisis has now revealed the austerity logic to be an utter sham: as advocates of modern monetary theory (MMT) have been saying for years, states that issue their own currency and issue debt in their own currency (i.e. every advanced country in the world with the notable exception of the eurozone) can never ‘run out of money’, nor can they become insolvent because, unlike households or firms, they can literally create money out of thin air. That’s what being a currency issuer means. In recent weeks, governments around the world have announced massive spending plans and double-digit deficits; yet, curiously enough, we haven’t heard any of the usual screams of “How are you going to pay for that?”.

On the contrary, even mainstream commentators are now admitting that these massive deficits don’t pose a problem because they will most likely be ‘monetised’ by the countries’ respective central banks: simply put, the latter will buy up as many government bonds as necessary and keep them on their balance sheets for as long as they like (potentially forever). As Lord Turner, the former head of the UK’s Financial Services Authority, recently said: “I do think the time is right for monetary finance. There would be a clarity of assuring people that there is no limit on the money available.” And there you have it, the austerity lie exposed: there has never been a lack of money for education, healthcare, infrastructure, welfare and other public services.

All the pain, suffering and misery imposed on millions of people as a result of austerity was entirely a political choice. All the cries of “How are you going to pay for that?” were simply a way to maintain the deeply unequal relations of power in our societies. To dramatically restrict our ability to imagine economic and political alternatives. But “all of these excuses that we have been given as to why we cannot treat people humanely have suddenly gone up in smoke”, as Alexandria Ocasio-Cortez said. If money can be created out of thin air to fight a ‘war’ against a deadly virus, doesn’t it follow that the same can be done to ‘wage war’ on poverty, unemployment, inequality, ecological collapse – all of which are much deadlier evils than Covid-19.

The second neoliberal shibboleth shattered by the pandemic is the superiority of private and liberal strategies over centralised economic planning and the welfare state, and the obsolescence of nation-states. For years (well, decades), we’ve been told that governments are wasteful and inefficient; that markets are able to operate more efficiently both in the short term and in the long term; and that governments are largely powerless vis-à-vis the forces of the global economy.

So governments have surrendered many of their national prerogatives to supranational organisations — the most obvious example being the European Union (EU) and monetary union — while state-owned firms and public services, including public hospitals and healthcare facilities, have been progressively underfinanced and privatised (often by appealing to the aforementioned austerity logic). Subsequently, many people, particularly the poorest and most vulnerable, are dying and will die in the coming weeks not as a result of the virus itself, but because there is a lack of hospital beds, staff, medical products and medical devices such as ventilators. According to OECD Health Statistics, Italy and Spain have today fewer hospital beds per inhabitant than China; France and Germany fewer than South Korea or Japan. Governments around the world are rushing to boost their hospital capacity but for tens of thousands of people it is too late already.

In other words, the crisis is exposing the neoliberal folly and injustice of extending a market– and profit-based logic to every domain of human life, including those, such as healthcare, which should be completely removed from the market. Moreover, it is showing that having a well-funded and rationally organised system of universal free care for all — which currency-issuing governments can totally afford in financial terms, as we have seen — isn’t just a matter of basic human decency but one of national security as well. Furthermore, the crisis has revealed that nation-states, far from being powerless vis-à-vis markets, from one day to the next can jettison pretty much every rule in the neoliberal book, and there’s nothing markets can do about it, except beg governments for help. Indeed, governments remain the only actors capable of taking control of the economy when push comes to shove, while on the other hand supranational organisations, such as the EU, are proving to be utterly useless, or worse.

This brings us to the third neoliberal shibboleth blown away by the coronavirus: the benefits of belonging to the European Union and eurozone. There’s a reason EU and euro countries — most notably Italy and Spain — have been hit so hard: the EU remains the only economy in the world where neoliberalism has been embedded into its very legal structure and effectively constitutionalised, through strict rules against government support to local industries, the constant encouragement of deregulation, the enshrinement of the ‘four freedoms’, and, above all, by depriving states of the central plank of economic policy, the currency.

The EU’s guiding principle was approvingly espoused by Italy’s former economics minister (2006-2008), the late Tommaso Padoa-Schioppa: to “weaken social protection” in all areas of citizens’ life, “including pensions, health, labour market, education”. It thus shouldn’t come as a surprise to find out that the European Commission made 63 individual demands of member states to cut spending on healthcare provision and/or privatise or outsource healthcare services between 2011 and 2018, in order to meet the arbitrary debt and deficit targets enshrined in the EU’s fiscal rules, as revealed in a recent report by the Emma Clancy, a political advisor in the European Parliament.

Euro countries such as Italy and Spain are, therefore, facing a double tragedy: not only are they fighting the ‘war’ against Covid-19 with severely debilitated healthcare services (thanks to the EU-driven cuts), but worse even, unlike the UK and all other currency-issuing countries, they’re fighting it without the support of a central bank. That is, they can’t ‘monetise’ the extra public funding needed to hire hospital staff and equipment, provide relief to quarantined workers and other emergency measures, but instead have to go cap-in-hand to the ECB, the European institutions and the EU’s de facto leader, Germany, which, for now, have adopted a largely business-as-usual response, even as the bodies of the dead pile up in Spanish and Italian hospitals.

It’s hard to imagine a starker demonstration of the British economist Wynne Godley’s warning, in 1992, that “the power to issue [one’s] own money, to make drafts on [one’s] own central bank, is the main thing which defines national independence” — and that therefore, by adopting the euro, member states would effectively acquire the status of local authorities or colonies. It’s unsurprising that support for the EU among Italian citizens has dropped to the lowest level ever.

Finally, the current crisis is exposing the madness of today’s hyper-integrated supply chains and the delocalisation of production that has taken place in recent decades, with countries finding out that they lack factories to produce basic medical equipment (such as masks) or much-needed medicines, which have suddenly become scarce with the collapse of global supply chains. Hyper-globalisation, just like the marketisation of public services, has proven to be not only a serious ecological, economic and social problem, but a threat to national security as well.

So does all this mean that we are witnessing the twilight of neoliberalism? If only things were that simple. We shouldn’t forget that this is not the first time in recent history that the establishment has deviated from its ideology in response to a crisis. The same thing happened in the aftermath of the financial crisis of 2007-2009.

We know how that ended: once the financial crisis was over, that same establishment used the increased debt levels as an excuse to double down on austerity and neoliberalism and revert to an even harsher version of the statu quo. In any case, neoliberalism has always used government intervention when convenient: to police the working classes; prop up the financial system; bail-out large firms that would otherwise go bankrupt; and open up markets abroad (including through military intervention). So we shouldn’t mistake an increase in government intervention now for the eclipse of neoliberalism. Indeed, it could serve as a prelude to an even more authoritarian version of the latter.

How all this plays out ultimately depends on us. The emperor is now naked and the ground for a radical paradigm shift — one based on popular sovereignty, democratic control over the economy, full employment, social justice, redistribution from the rich to the poor, relocalisation of production and the socio-ecological transformation of production and society — is indeed more fertile than it has been in a long time. Yet change won’t come from above but only through mass mobilisation once the worst of the crisis is over.