The Economic Response to the CoronavirusPandemic

As the coronavirus (COVID-19) spreads across the United States, it has become clear that, in addition to the public health response (which has been far less than adequate), an economic response is needed. Yet the usual policy approachesof monetary and fiscal stimulus take aim at the wrong target.

The Fed’s dramatic between-meetings interest rate reduction already proved futile. That was designed to boost Wall Street, but at best the impact on share prices lasted mere hours—and exhausted most of its ammunition. On the fiscal side, the President pushes for a payroll tax holiday, while some economists are recommending cash giveaways to quickly put money in people’s pockets (Jason Furman has proposed1 a one-time payment for all citizens or taxpaying residents and every child: “A week ago, I thought $1,000 per adult, $500 per child. Now I’d double or triple that”). Both proposals would make sense if we were dealing with the usual problem of insufficient aggregate demand, but it is hard to justify them as a solution to a problem of supply. The Institute for Supply Management reports2 supply disruptions for 75 percent of companies surveyed. Tens of millions of workers around the globe have already been forced to stay home from work, and quarantines will spread acrossthe United States. What will people buy with the quick cash as the global supply chain comes to a screeching halt (a $60 hand sanitizer, perhaps)?

What is more importantis a set of policies that tackles the health crisis head-on while also mitigating the economic uncertainties faced by households and their communities. These include: (1) full coverage of medical costs associated with testing and treatment of COVID-19; (2) mandated paid sick leave and full coverage of associated costs; (3) debt relief for families; and (4) swift deployment oftesting and treatment facilities to underserved communities. We will probably still need some demand stimulus, but these four steps require immediate attention.

The federal government should increase its share of Medicaid to cover all costs of testing and treating covered patients for the virus (incredibly, the Trump administration has just prohibited3 state use of Medicaid funds to respond to this crisis—even though that was permitted after the 9/11 terrorist attacks, Hurricane Katrina, and the H1N1 flu outbreak). This will relieve state budgets. Additionally, Medicare coverage (now limited to those age 65 or older) should be extended to all ages for testing and treatment for COVID-19. All medical care facilities that currently accept Medicare patients would be reimbursed at Medicare rates for such treatment, with no out-of-pocket costs. We should also ramp up testing, following South Korea’s example, to gauge the extent of the epidemic, improve containment,and mitigate uncertainty.

Last week, emergency paid sick leave legislation was introduced into the Senate but blocked by Senator Lamar Alexander on the argument that it would impose the costs on employers. House Democrats introduced the Families First Coronavirus Response Act, to supplement privately supplied sick leave with federal funding for workers through an application process. That would be a good start, but we need an immediate and universal program to include workers in small firms, without putting additional financial stress on small employers. For that reason, we prefer a universal, federallyfunded program in which all employers would be required to provide paid sick leave to employees for absence due to the disease —including quarantine for exposure and care for family members. Employers would receive a refundable tax credit for wages paid to those on leave for the duration of the epidemic.

The President has suggested tax postponement for affected families. Some Democrats are also suggesting that payments on student loans and federally guaranteed mortgages could be postponed. There also is a proposal for an additional $50 billion4 allocated to the Small Business Administration to provide loans in affected areas. All of these ideas are a good start. But because the economic effects will linger far beyond the viral epidemic, we need to make progress on permanent relief for families overburdened with student loan debt and mortgage debt.

In response to the crisis, China famously built new hospitals from the groundup in a matter of days. The United States has already wasted months it could have used to prepare for the epidemic’s spread. While the United States will not build hospitals in a few months, we must expand treatment capacity in underserved areas around the country. Our response, so far, has largely been to send infected people home to “self-quarantine,”where they expose others to the disease—clearly an inadequate response. We need to protect communities, and to provide care even for those who are not seriously ill. Temporary “field hospitals” will need to be dispersed around the country to deal with the inevitable explosion of infections.

Finally, we hope that after enjoying a payroll tax holiday, plus a taste of what Medicare-for-All and universal sick leave look like, Americans would exert political pressure to keep those as permanent policies after this crisis passes.

ECB boss Lagarde says “we are not here to close spreads, that’s not function of ECB”.

It is beyond belief that these characters remain in charge. All Eurozone Member States should plan to exit what is a dysfunctional, poorly designed system run by recalcitrant elites. Now!

Absolutely unacceptable. I cannot stress enough how cruel and immoral the #Eurozone monetary system is. Relief and funding must be provided to all member states on demand. The public good cannot be sacrificed to the vagaries of the private sector.

Italy 10y risk spread over Germany explodes as #ECB’s Lagarde says ‘we are not here to close spreads, that’s not function of ECB’. 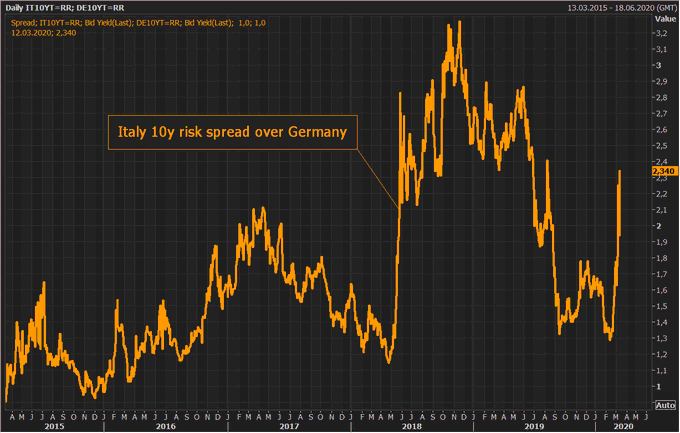