1/ Ever since 1796, when the first dollar was created, every single dollar of spending by the US federal gov’t has been with created currency. This logically extends to, “Taxes cannot pay for federal spending.” Below is confirmation from economists, experts, and those in power.

3/ @benbernanke, Chairman of the Federal Reserve during the Great Financial Crisis of 2008, on CBS’ @60Minutes in 2009: “The banks have accounts at the Federal Reserve. To lend to a bank, we simply use a computer to mark up the size of the account.” 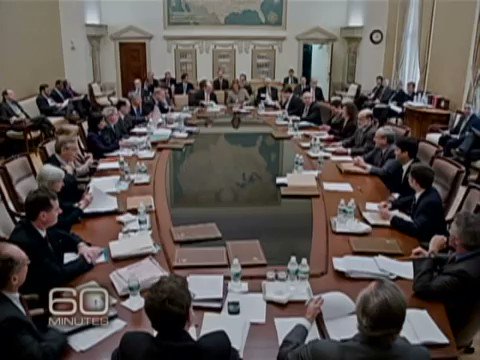 Here is @JoeBiden own Federal Reserve Chair and also a Fellow at the Brookings Institute where they admitted that they bailed out the banks by printing money. …

4/ @benbernanke in 2013, testifying to Congress. @Forbes: Congressman: “Where does the Fed get the money to buy [assets]? Do you create the reserves?” B: “Yes.” C: “Are you printing money?” B: “Not literally.” (meaning in a computer, not physical bills)

Bernanke Admits To Congress: We Are Printing Money, Just ‘Not Literally’

5/ Alan Greenspan, Chariman of the Federal Reserve, 1987-2006, testifying to @SpeakerRyan in 2005: “There is nothing to prevent the government from creating as much money as it wants.”

Greenspan: “There is nothing to prevent the government from creating as much money as it wants.”

6/ Alan Greenspan, Chariman of the Federal Reserve, 1987-2006, on NBC’s @MeetThePress: “The United States can pay any debt it has because we can always print money to do that. There is zero probability of default.“

Greenspan: US Can Pay Any Debt It Has Because It Can Print Money To Pay It

7/ Beardsley Ruml, Chairman of the NY Federal Reserve, 1941-1946: “TAXES FOR REVENUE ARE OBSOLETE” Title of an article by Ruml in the January 1946 issue of American Affairs quarterly journal: http://bilbo.economicoutlook.net/blog/wp-content/uploads/2010/04/taxes-for-revenue-are-obsolete.pdf … 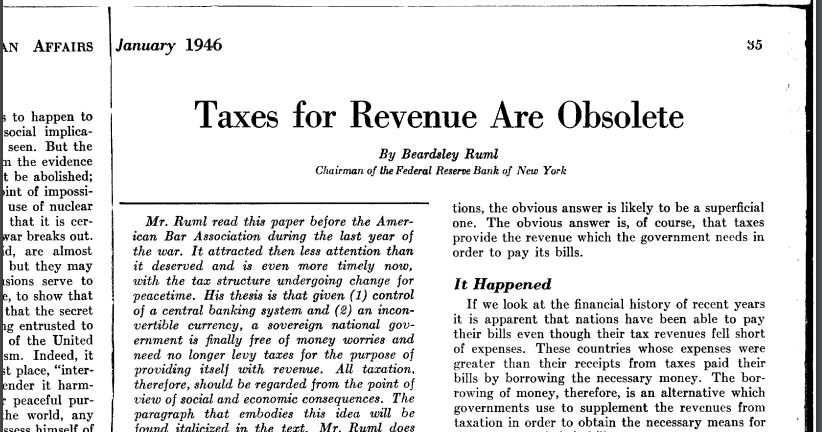 8/ Economist @StephanieKelton, in the abstract of her 1998 paper, “Can Taxes and Bonds Finance Government Spending?” http://www.levyinstitute.org/pubs/wp244.pdf

9/ Australian economist @billy_blog, 2010: “Taxpayers do not fund anything. When commentators & politicians use terms like “taxpayers’ funds are being mis-spent,” you can immediately conclude they don’t understand how the monetary system functions.”

Taxpayers do not fund anything

Randy Wray: What are Taxes For? The MMT Approach

11/ @wbmosler, the “father” of #MMT, on page 15 in his book, The Seven Deadly Innocent Frauds of Economic Policy (2010): “It makes no sense at all to think that the government has to get money by taxing in order to spend.” 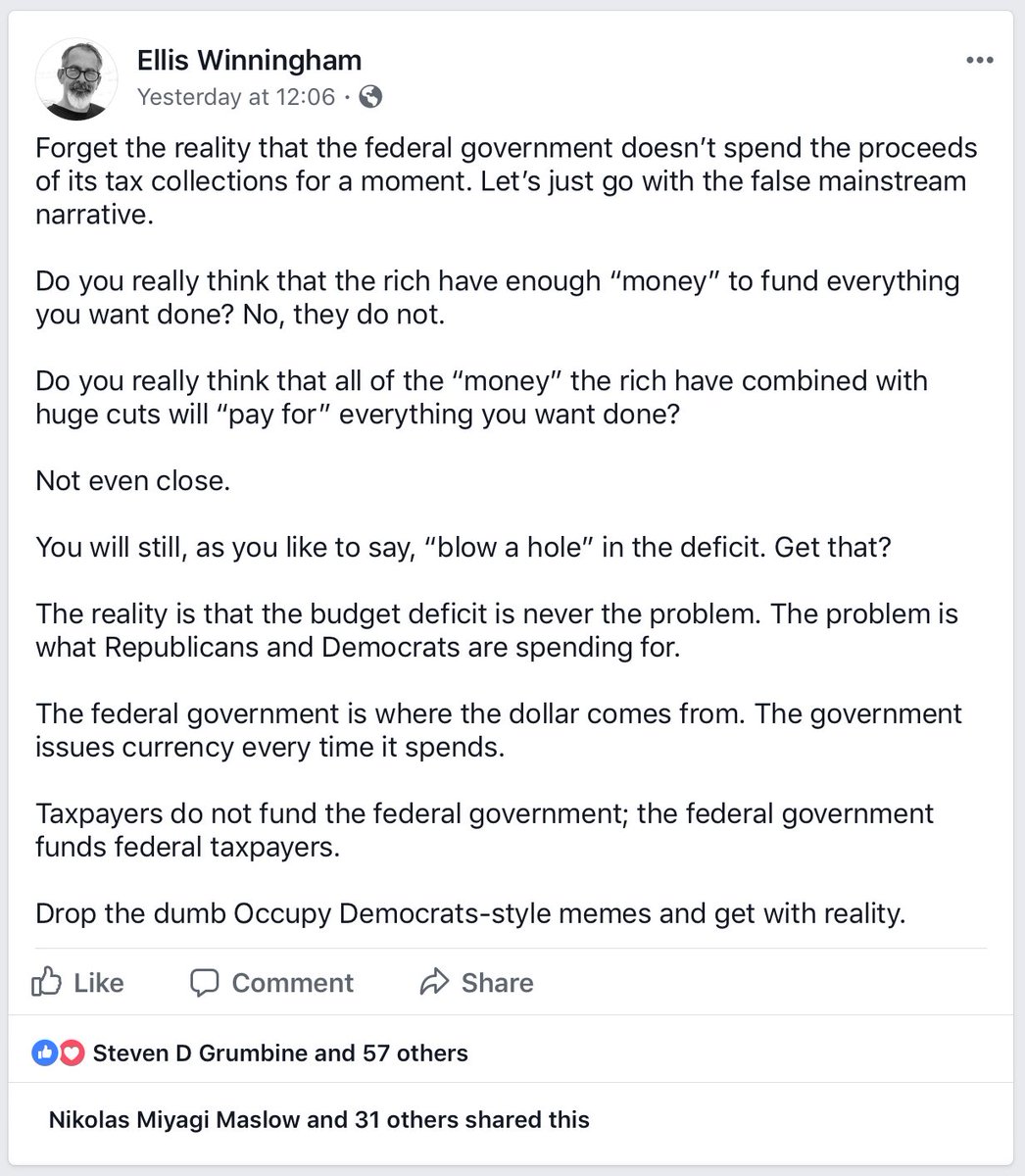 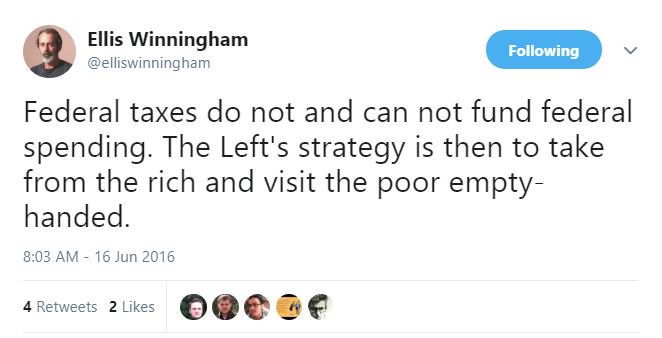 13/ @wbmosler (again), the “father” of #MMT, on page 9 in his book, “The Seven Deadly Innocent Frauds of Economic Policy” (2010, http://moslereconomics.com/2009/12/10/7-deadly-innocent-frauds/ …): Fraud number one: “The government must raised funds through taxation or borrowing in order to spend.”

Any other good ones, please share them in the replies.

#MMT: All federal spending is done with created currency…which logically extends to mean that federal taxes do not and cannot fund federal spending. Confirmation by many economists, experts, and the powerful, each with sources. [article form]

Confirmation by economists, experts, and the powerful, that the United States federal government pays for *everything* with created currency

If you want to learn how the economy ACTUALLY works, as opposed to what our corrupt politicians, media, and “experts” want you to believe, here’s a full lesson, Twitter tutorial (with many expert sources at the end), and a recent interview on the subject. https://twitter.com/citizensmediatv/status/1053973840605396992?s=21 …