(c) And then Mosler shows up
(http://mikenormaneconomics.blogspot.com/2015/04/and-then-mosler-shows-up.html)

(d) Going around telling people the deficit is too small is a non starter
(http://mikenormaneconomics.blogspot.com/2015/04/going-around-telling-people-deficit-is.html)

(f) Time to ask ourselves, why hasn’t MMT caught on?
(http://mikenormaneconomics.blogspot.com/2015/07/time-to-ask-ourselves-why-hasnt-mmt.html)

(g) Federal deficit is going up again. Up $40 billion versus last year.
(http://mikenormaneconomics.blogspot.com/2016/03/federal-deficit-is-going-up-again-up-40.html)

(h) Who made this call? I did!
(http://mikenormaneconomics.blogspot.com/2016/04/who-made-this-call-i-did.html)

(i) The deficit is now $73 billion larger than last year and growing.
(http://mikenormaneconomics.blogspot.com/2016/04/the-deficit-is-now-73-billion-larger.html)

(j) Deficit is up 25% over last year, as I forecast. Will the “deficit is too small crowd” now change their position?
(http://mikenormaneconomics.blogspot.com/2016/09/deficit-is-up-25-over-last-year-as-i.html)

Tom Hickey said…
I’d assume they would say that it is still not big enough Mike….

If there is underemployment, the deficit is not big enough, as I understand it.

Marriner Eccles said that 90% stimulus doesn’t cut it in ending a crisis.

And a note: in 2010 he was telling us all there would not be a second crash or double dip because the deficit was still over 10% of GDP.

Gary Hart said…
Somebody correct me but from what I understand from Bill Mitchell the deficit should not be compared to GDP, but should be large enough to quell unemployment.

Then why is economic growth (according to the U.S. Bureau of Economic Analysis*) only 1.1%, when the average from 1947 to 2016 was 3.22%? Why are 94 million Americans underemployed or unemployed? Why are 45 million still on food stamps?

Who is benefiting from these flows? Just traders? Just Wall Street?

These are sincere, serious, questions. I am not asking them to be an asshole or smart-ass. I would really like to be enlightened, if possible. The deficit is just the difference between govt spending and taxes collected. An accounting measurement that recognizes the level of congressional spending and exercise of fiscal policy, the latter a phantom of times past. I really don’t see the contradiction that you claim makes Mosler wrong.

Mosler consistently says borrowing to spend (to grow output) can come from any combination of the indebtedness of the public/private sectors. So yeah, the deficit remains too small.

Mr. Norman’s nit-picking (by assuming that Mosler strictly means the public “deficit is too small”) is Mike’s go-to recourse to assuage his own ego. Therefore, no dogma-free economics on MNE.

Over 2 million have left SNAP roles since 2014, making the total today closer to 42m.

Deficit is the highest in 6 years. Where are all the MMT gods??

The deficit is now $766 bln, the highest in 6 years and the highest in 5 years as a %  of GDP. Where are all the MMT gods touting this as bullish? Mosler‘s still bearish. He’s been bearish for 4 years. Missed the entire rally. 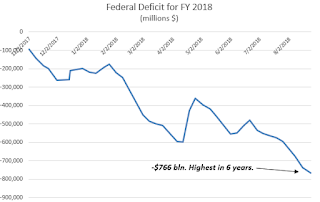 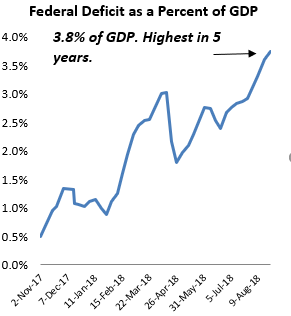 BTW…at Mike Norman Economics we look at FLOWS. It gave us the bullish signal a long time ago.

MMT is a useful economic model, seems like once Wray left and Mosler retired the remaining people became more interested in using the model as a means to promote political careers than the political economics itself.

Too bad in a way for the MMT analysis that gets bandied about like Mosler or Kelton clearly doesn’t go very deep any more — missing all the interesting things.

well said RH…many questions re: MMT today (lack of good paying blue collar jobs, and resulting increased consumer debt) go unanswered, including my questions on Twitter responding to Aussie Prof. Bill Mitchell…is anybody paying attention, with exception of Mike Norman? But, WTF do I know, so I follow Ocasio-Cortez for entertainment purposes…

How much of this “deficit” was used in the public (Tom, Dick and Harriet…) interest?

Stephanie Kelton, Stony Brook University professor of public policy and economics, discusses the impact of U.S. tax cuts and infrastructure spending on employment and the economy with Bloomberg’s Joe Weisenthal on “What’d You Miss.”

The basic MMT position is that the size of the deficit doesn’t matter as long as the economy has spare capacity, i.e. as long as the deficit does not exacerbate inflation too much. In contrast, when the economy IS NEAR or at capacity, a country needs to be careful on the size of the deficit. In particular if it has an independent central bank, the CB will simply negate what it sees as an excessive deficit with interest rate rises. To judge by Kelton’s pronouncements, it’s not entirely clear to me that she gets that point, though I could be wrong there.

“Gross domestic product, the value of every good and service produced domestically, rose at an annual rate of 4.2%, the Commerce Department said, revised up from 4.1% in the advance estimate. It remained the fastest pace of growth in nearly four years.”

Berriz: Why are 94 million Americans underemployed or unemployed?