(Valueless souvenir currency is being sold in Rheinland-Palatinate in honour of Marx’s 200th birthday. Photo: DPA)

Karl Marx was born on May 5th, 1818 in Trier in what is now Rheinland-Palatinate. Many cities in the surrounding area are using the upcoming anniversary to gain big capital from multiple Marx-themed memorabilia, including a ‘zero-euro’ bill introduced in March (…)

The German thinker is known for (…) works such as “Capital. A Critique of Modern Political Economy”. (…)

However, in celebrations of Marx’s birth, people are wasting no time attempting to gain as much ‘capital’ as possible.

In Chemnitz – a city that was called ‘Karl-Marx-Stadt’ during the GDR’s reign – there is a new beer with the name MarxStädter (Marx townspeople). In Trier, visitors can also purchase a Karl-Marx wine – a red one of course.

For those looking for a vessel for all of these Karl-Marx themed drinks, cups are also one of the items available for sale, with logos including Marx’s head, quotes from the famous philosopher, and red and green Marx traffic lights, which are also currently located in the city. (Marx-themed rubber ducks are among the souvenirs available for purchase in Trier. Photo: DPA)

The real treasure in the Marx-themed merchandise, though, is a ‘zero-euro’ bill, which has been introduced to the international market by the Trier Tourism company for the last few months. 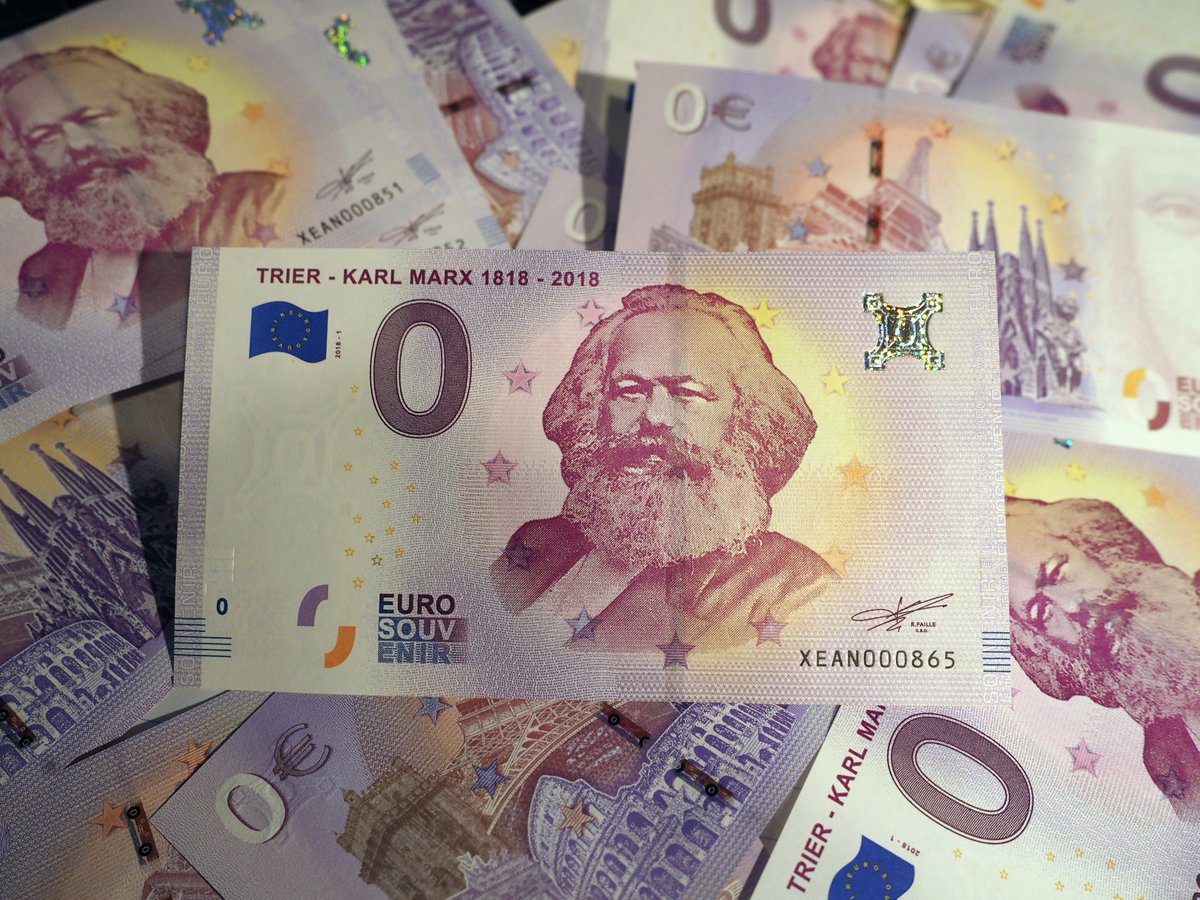 By the end April, there are expected to be more than 20,000 copies of the Marx-inspired zero-euro currency, which are available for pre-purchase on their website.

For the city of Trier, this is proving to be a lucrative business: The ‘zero-euro’ bill costs three euros.

As to whether or not Marx, who was avidly anti-market capitalism, would have liked having his face attached to money, the Trier Tourism boss Norbert Käthler told newspaper T-Online that he does not like to say.

However, Käthler said that he thinks, “the idea of a zero-euro at least takes off in the direction given by Karl Marx.”

Walkers of the world unite: Marx traffic light installed in his hometown Karl Marx has begun lighting up his birthplace of Trier, appearing on traffic lights with outstretched arms and his token gruff beard.

The lights were installed on Monday, slightly shy of the 200th anniversary of Marx’s birth on May 5th, 1818. With a modern twist, they were installed with LED technology, with the figure of Marx stencilled in the light with lasers.

“It’s a beautiful symbol and the city is showing its flags for Marx,” said Trier mayor Wolfram Leibe, who commissioned the first light installation.

Another traffic light is slated to be installed before Easter weekend at the Karl Marx House, where the communist philosopher was born. (…)

The anniversary of Marx’s birth has not come without controversy, as Trier was criticized last year when it accepted a bronze statue of him from the communist Chinese government. The figure is set to be erected close to the traffic light on May 5th.