Work session in #Geneva with @Alfreddezayas, professor on international law and expert on self-determination. 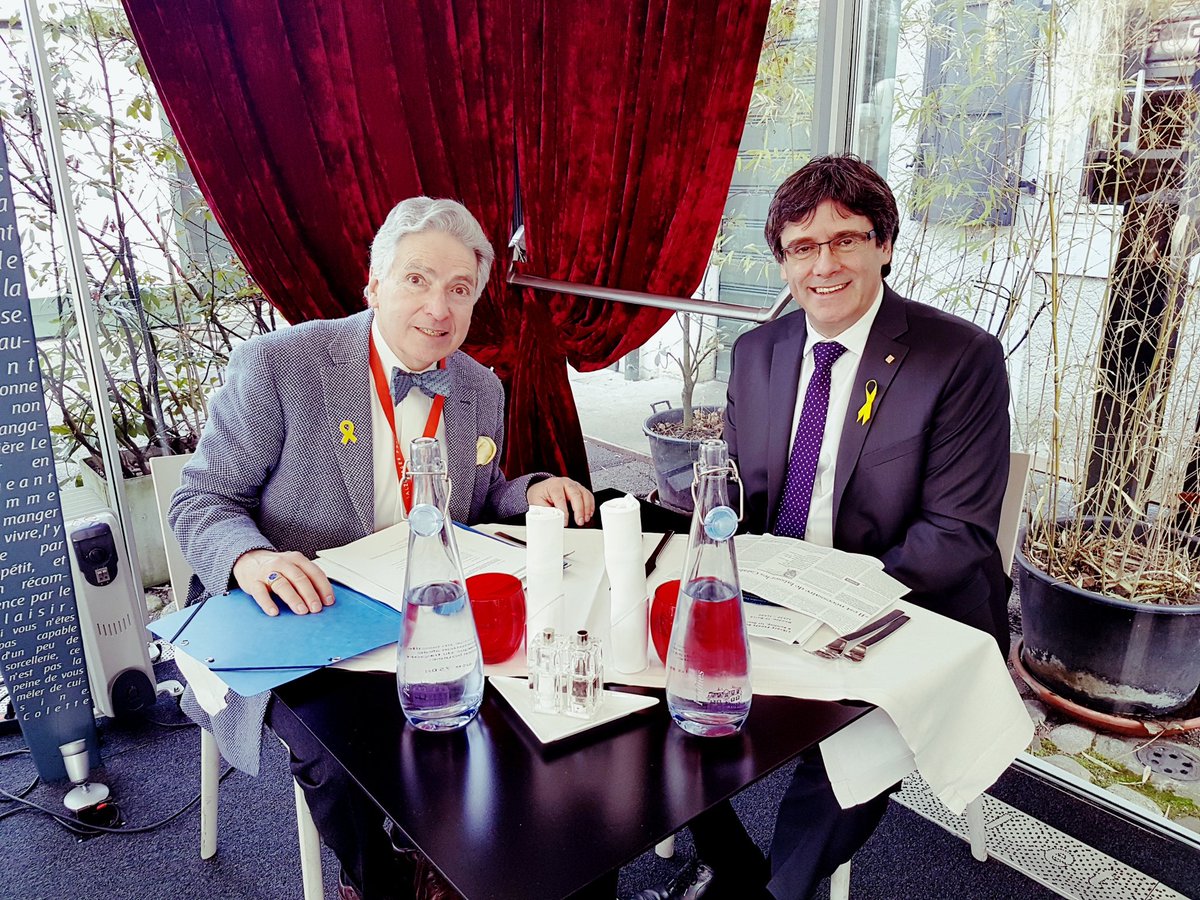 GENEVA (15 March 2018) – The UN’s first Independent Expert on the promotion of a democratic and equitable international order, Alfred de Zayas, today shared his seventh and final thematic report to the Human Rights Council at an event on the margins of the Council’s 37th session.

The report, which draws together recommendations from 12 previous reports to the Council and General Assembly, argues that the so-called fragmentation of the international order does not put into question the validity of the international human rights treaty regime. Rather, proliferating international challenges highlight the urgent need to apply human rights principles systematically and uniformly to all entities and endeavours. Selective application of international law results in loss of legal and moral authority.

“We are already seeing the consequences of a world order where human rights are relegated to the sidelines,” de Zayas said. “What we see is a financial system rigged in favour of powerful individuals and corporations, unequal participation in governments and international organisations, and communities suffering from a reduction of social services, imposed austerity, privatization of public utilities, the misplaced priorities of political leaders and a general absence of genuine representation,” observed the expert.

In his full report* – based on six years of work  on the mandate – the Independent Expert identifies 23 principles of international order which should guide all individuals and institutions to achieve a more just and inclusive world. Among them, he highlights the supremacy of the UN Charter over all other treaties, the validity of the human rights treaty regime over commercial and other interests, and the inviolability of State sovereignty. “Moreover, any and all exercise of power, especially economic power, must be subject to some democratic controls,” said de Zayas.

In addition to increasing financial transparency and closing tax loopholes, de Zayas’ report urges States to protect whistleblowers who expose corruption and government wrongdoing. “In a very real sense whistleblowers are human rights defenders and they must be protected domestically and internationally,” emphasized the Independent Expert.

He also links rising risks of conflict to unequal participation both in national and international governance structures. “The voices of developing States must be heard by the international financial institutions, and all governments, rich and poor should have democratic impact on global decision-making. Especially in matters of trade, it is imperative to give all stakeholders the opportunity to weigh in the negotiations so as to ensure transparency and accountability,” said de Zayas.

“I place the focus of the mandate on promoting peace, including the human right to peace in its individual and collective dimensions. In a context of increasing confrontation and competition among world powers, we must re-centre peace as a unifying multilateral objective, and we must ensure that propaganda for war and saber-rattling are banned,” said the Independent Expert.

“In particular, governments should understand and implement disarmament for development and adopt concrete measures to re-direct the enormous financial resources spent globally on weapons, military exercises and war to climate change mitigation and the Sustainable Development Goals. Complete nuclear disarmament and the destruction of all chemical and biological weapons is an urgent priority, lest a madman or a computer glitch unleash the Apocalypse.

“The realization of the right of self-determination, which numerous minorities, indigenous peoples and unrepresented peoples continue to demand, should be given effect by States and recognized as a conflict-prevention strategy. This is important because there are hundreds of aspirants for internal or external self-determination, and the attempt to suppress it will result in armed conflict,” indicated Mr. de Zayas .

Democratic participation, he further noted, should be seen as a vehicle through which the will of populations are taken into consideration. Real democracy requires a correlation between the will of the people and the policies that affect them. More and more representative democracy has ceased being participatory democracy. Regular elections do not ensure democracy. What is needed is effective consultation of the population supported by genuine access to reliable and pluralistic information. The tools of direct democracy such as the power of legislative initiative and the possibility of challenging legislation by referenda would contribute to a stable and peaceful international order.

“In an age where States and non-State actors alike have the power to make the international order more undemocratic and unequal, international norms must bind all actors universally and uniformly, and effective enforcement mechanisms must be put in place,” concluded the Independent Expert.

*Report of the Independent Expert on the promotion of a democratic and equitable international order: http://ap.ohchr.org/documents/dpage_e.aspx?si=A/HRC/37/63

The Special Rapporteurs and Working Groups are part of what is known as the Special Procedures of the Human Rights Council. Special Procedures, the largest body of independent experts in the UN Human Rights system, is the general name of the Council’s independent fact-finding and monitoring mechanisms that address either specific country situations or thematic issues in all parts of the world. Special Procedures’ experts work on a voluntary basis; they are not UN staff and do not receive a salary for their work. They are independent from any government or organization and serve in their individual capacity.

This year, 2018, is the 70th anniversary of the Universal Declaration of Human Rights, adopted by the UN on 10 December 1948. The Universal Declaration – translated into a world record 500 languages – is rooted in the principle that “all human beings are born free and equal in dignity and rights.” It remains relevant to everyone, every day. In honour of the 70th anniversary of this extraordinarily influential document, and to prevent its vital principles from being eroded, we are urging people everywhere to Stand Up for Human Rights: www.standup4humanrights.org.