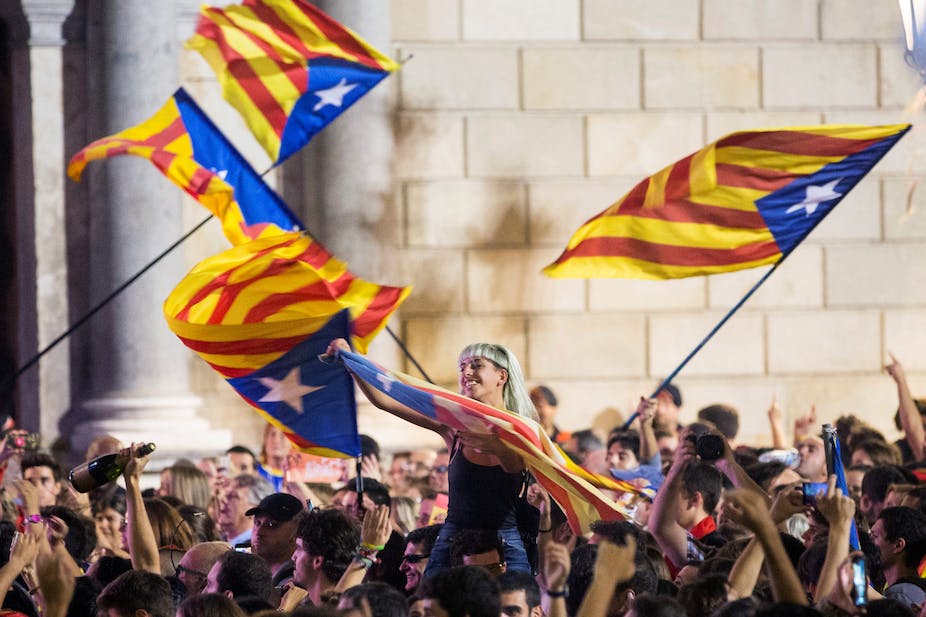 Celebrations in Barcelona on October 27 were shortlived. Quique Garcia/EPA

One of the main arguments against Catalonia’s claim to independence is that it is illegal under the Spanish constitution. The Spanish prime minister, Mariano Rajoy, described the declaration of independence as “a criminal act because it is intended to declare something that isn’t possible – Catalan independence”.

International opposition to the move has also centred on the constitution. The German chancellor, Angela Merkel, declared: “We hope there are solutions found on the basis of the Spanish constitution,” while NATO’s secretary general Jens Stoltenberg said the issue “must be resolved within Spain’s constitutional order”.

Whether the Spanish government acted according to the constitution is a matter of some debate. Carles Puigdemont, Catalonia’s president – ousted by Madrid on October 27 – rejected the legality of Rajoy’s imposition of direct rule. Nonetheless, even if the Spanish government abides by its constitution, to suggest that this alone disqualifies Catalonia’s claims is a deeply flawed argument.

The inherent right to self-determination

In an ideal world, a region’s secession should take place with the host state’s consent. If the central government allows a region to initiate a process of self-determination then of course the issue is relatively straightforward. But allowing a region to initiate a process does not automatically mean the end result is secession. Referendums on independence in both Scotland and Quebec resulted in a no vote.

In recent years, a number of states have declared independence with the consent of the host state – albeit reluctantly given after an initial refusal. These include Slovenia in 1991, East Timor in 2002 and South Sudan in 2011, when the results of a referendum on independence were eventually accepted by the host state. In a similar vein, Czechoslovakia peacefully separated into the Czech Republic and Slovakia in 1993 with the agreement of both regions.

Clearly, Catalonia is different given the Spanish government’s refusal to allow a referendum to take place. But this poses a fundamental question: is a host state’s approval essential if a country is to declare independence? The answer must be no, because to argue otherwise is contradictory – and clashes both with international law and common sense.

By definition, self-determination presents a challenge to the host state. To accept that there is a right of self-determination under international law but then claim that this right is conditional on host state consent – as is currently being argued by Spain and its allies with respect to Catalonia – is simply illogical. This is akin to saying that all women have the right to divorce their husbands but only if their husbands agree.

Spain’s refusal to accept the possibility of Catalan independence manifestly negates the very idea of self-determination. This position essentially denies self-determination is an inherent right by ceding all power to the host state. If applied globally, this principle would sanction the immutability of borders, and sentence millions of people across the world to remain permanently trapped under the jurisdiction of governments that they do not recognise.

The championing by Western liberal democracies of the Spanish constitution over the Catalonians’ right of self-determination is also clearly hypocritical. This state-centric approach violates core principles of liberalism related to freedom and liberty – and it also jars with the approach taken towards Kosovo. 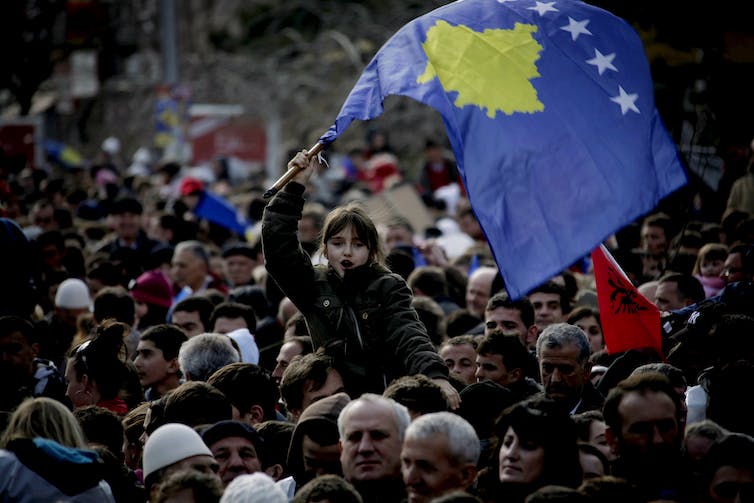 Celebrations in 2009, a year after Kosovo’s independence. Ermal Meta/EPA

Kosovo unilaterally declared independence from Serbia in 2008. While Spain has not recognised Kosovo, 82% of EU states and 86% of NATO states have done so. That the US, UK, Germany, France and many others recognise the unilateral secession of Kosovo, but deny Catalans the same right, obviously has much more to do with alliances and power politics than any adherence to legal or theoretical principles. Spain’s membership of both the EU and NATO means that it is being treated differently, and this lays bare a selective approach to international law.

References to Kosovo in the Catalan case invariably provoke the counter-argument that Kosovo “deserved” independence because its people suffered greatly at the hands of the Belgrade government. While the claims regarding oppression are certainly true, this too is an unconvincing argument. Making the legitimacy of self-determination conditional on oppressive behaviour by a host state does not make sense. It would be like telling independence activists that they have to stay within their existing state until they are killed in large numbers. This is an obviously ridiculous principle and one which certainly has no place in international law.

By defending Catalonia’s right to self-determination, I am not necessarily arguing that self-determination is the right thing for Catalonia. The legitimacy of any group’s secessionist claim has to be determined by an array of factors. These include the political coherence of the entity seeking independence and the degree of support the move has among citizens of the region that would secede. The viability of the entity as an independent state and the impact of secession on regional and international peace and stability are also key questions. So while opposition to Catalan independence based on these factors may be credible, arguing that is it impermissible because it is illegal under the Spanish constitution cannot be.