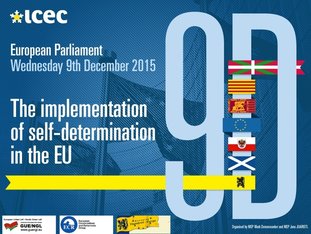 Last year (December 2015), ICEC organised the 1st part of the symposium focused in “The implementation of Self Determination in the EU”.  Sponsored by NVA and BILDU European groups, and gathering academics, politicians and activists, speakers underlining a strong understanding of Democracy. Democracy, not only as a result but mainly as a method of doing politics based on citizenship participation. 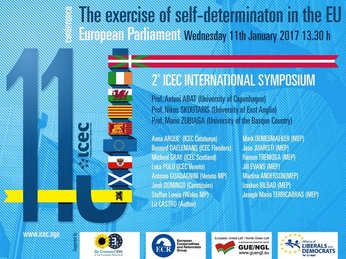 This year (January 2017) ICEC conference has had new speakers and we greatly welcomed the Welsh, Irish and Catalan MEPs for participating and adding themselves to the Flemish and Basque sponsoring groups. We wish to specially thank to the Venetian Parliament secretary, Antonio Guadagnini, the Scottish Common Space journalist, Michael Gray, the Catalan Constituïm spokesperson, Jordi Domingo, and the head for intl. Relations of the ANC, Montse Daban, for accepting ICEC invitation and offer to an always diverse European audience, their views on various themes related to Self Determination.

This year (January 2017) ICEC conference has had new speakers and we greatly welcomed the Welsh, Irish and Catalan MEPs for participating and adding themselves to the Flemish and Basque sponsoring groups. We wish to specially thank to the Venetian Parliament secretary, Antonio Guadagnini, the Scottish Common Space journalist, Michael Gray, the Catalan Constituïm spokesperson, Jordi Domingo, and the head for intl. Relations of the ANC, Montse Daban, for accepting ICEC invitation and offer to an always diverse European audience, their views on various themes related to Self Determination.

Interventions from Flemish MEP Mark Daemesmaker and Basque academic Juanjo Àlvarez on the defence of all democratic results as a core principle of the EU institutions and the need for these institutions to be prepared for the more than probable coming independence of historical European nations. Nations which win such a new status by the participation and democratic expression of their citizens’ will.
The legality of unilateralism was specially defended by Catalan ICEC spokesperson, Anna Arqué and by the Venetian ICEC spokesperson, Luca Polo. 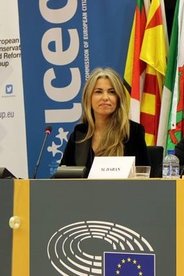 Arqué exposed the positive recognition that Catalan people do of themselves as a nation/People, acknowledge their rights as European people and their determination to exercise them. “The exercise of Democracy can never be punished by European institutions with the expulsion from them of millions of European citizens, that would erase all ethical backbone to the common European project and be the end of the EU. We do not ask EU Institutions to express their support for Scottish or Catalan independence but we do expect them to act as a warrant in favour of the exercise of universal rights in front of any obstacle or threat expressed by any member State”. 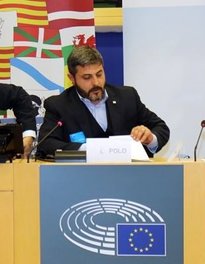 The Venetian ICEC spokesperson, Luca Polo, was in charge to explain the Venice resolution (approved by Venetian Parliament) and the link it has with ICEC political philosophy as a source of its inspiration. Polo, stressed the idea of “self-determination as a sovereign act of democratic will to solve political open conflicts”. The Venice resolution has been adopted by ICEC as a summary of these two conferences on self-determination in the European Parliament and states the following:

“We therefore recognize that whenever the exercise of the universal right of self-determination is rejected by the state institutions, citizens and nations of Europe can do and should do the only possible thing: unilaterally exercise through their representative democratic parliaments this right that is configured by its nature in the international law framework” Veneto Parliament – Resolution n. 27 – 2016, November 29th

Worth mentioning the ICEC text written expressly for the conference by Catalan professor Antoni Abat i Ninet (University of Copenhagen) on the “legality of unilateralism”:

“The unilaterality, understood as legislating a own norm and enforcing it, it doesn’t only predisposes an illegality, but it is a defining and essential characteristic of legal norms. In this meaning the difference between a norm and a legal norm is its enforceability.  Unilaterality involves an act of sovereignty necessary to consider the norms as law.
Indeed, s’ tried not to apply the norms of international law and human rights which include the principle of self-determination to deny its legality. When Catalonia, it is relaunched a referendum agreed with the state and this one not only doesn’t negotiate, but applies criminal law and repression against legitimate representatives of Catalonia, the only possible solution is a referendum in unilateral form.
The defense of the referendum, unilateral or not, is an obligation of the democrats all over for two reasons,
a) (Democratic Principles) to what it means to defend the essential democratic principles of modern constitutional democracies
b) (Rule of Law) to what it means to defend the human right to self-determination toward a subordinate and inferior rank principle, as is the principle of territorial integrity. This defines the decision of the ICJ on Kosovo. “ 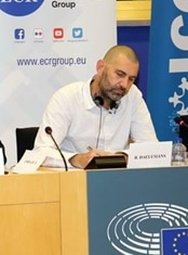 To conclude the conference, Bernard Dealemans, spokesperson for ICEC Flanders, gave an overview of our well rooted principles on Democracy and self-determination and the formalising process that our NGO has undertaken, announcing our international legal base in Brussels and ICEC new website www.icec.ngo
Steven Vergauwen, representative of ICEC Flanders, who has been in charge of coordinating all the necessary details for the success of the conference, has recently appointed as ICEC Secretary. We also wish to announce our new treasurer, Florian Von Ach and our new spokesperson for Euskal Herria Xabier Zarandona and last but not least, we really want to thank to all board members Joan, Shona, Gianluca, Paul, Iñigo, and many members like Hilde, Joan R., Carles, Brice, Josep M, Egon, etc..etc.. for their constant enthusiasm and active participation.