The left in Europe needs to change political course2

“… Several social democratic and socialist parties in the EU have supported austerity policies since the financial crisis and are now paying the political price. The Democrats in the US, New Labour in the UK, and Germany’s SPD were among those most enthusiastic about deregulating financial markets. The SPD in addition endorsed the eurozone’s stability pact in the 1990s, and the constitutional balanced budget rule in Germany, which has been effective since 2011. The party’s failure to learn from its own history is breathtaking. While the SPD pays lip service to higher infrastructure investment, it cannot deliver any of this because of its commitment to a balanced budget.

… From an economic point of view there is nothing extreme in the argument for large investment programmes, especially after years of fiscal consolidation. Yet the only established political party that offers this choice in Europe is Mr Corbyn’s, which is promising £500bn. In Germany, only the Left party, successors to East Germany’s communists, supports big increases in investment. On the continent you have to go the outer extremes of the political spectrum to find someone to endorse an investment stimulus.

(…) Eurozone citizens only have two paths towards more investment. The first is exit from the euro, the only legal way for a country to escape the fiscal rules that constrain investment at national level. It is the choice offered by extremist parties (sic).

The second option would be a eurozone-wide investment programme, centrally administered, funded by the issue of common debt securities or, more crudely, by printing money. The issues of eurobonds and debt monetisation are deemed politically unrealistic, given Germany’s opposition. So unless you opt for extremist parties, there is no real-world choice. (…)”

From the great prosperity to the great regression. 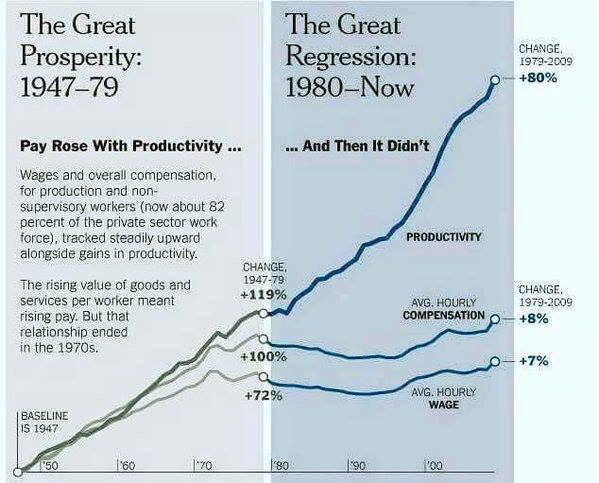 “The bank that made speculation a business model is now saying it is a victim of speculators.” #DeutscheBank

“Is Deutsche Bank technically insolvent? We’d suggest that it probably is, but we have no dog in the fight, having never either owned banks, or shorted them. And like everybody else we assume that some kind of fix will soon be in – probably one that will further vindicate exposure to gold, both as money substitute and currency substitute. Professor Kevin Dowd, asking whether Deutsche Bank ist kaputt, suggests that the bank’s derivatives exposure is difficult to assess rationally; the value of its derivatives book

“is unreliable because many of its derivatives are valued using unreliable methods. (…)

… It is eight years since Lehman Brothers failed, and the financial system, especially in Europe, would seem to be in no better shape now than it was back then, going by the health of some of the region’s major banks, and also Barclays. (…)

… A month from now, we’ll publish our new book: ‘Investing Through the Looking Glass: a rational guide to irrational financial markets’. It covers en passant the Lehman crisis, of course, but also the much wider financial landscape: a multi-decade bubble in debt for which Deutsche Bank may yet serve as the terminal pin, the fundamental and seemingly intractable problems with bankers, central bankers, economists, fund managers, and the financial media. Few prisoners are taken. Few deserve to be.”

More Confessions of an Economic Hit Man: This Time, They’re Coming for Your Democracy7

Perkins: Yes, when I was an economic hit man, one of the things that we did, we raised these huge loans for these countries, but the money never actually went to the countries, it went to our own corporations to build infrastructure in those countries. And when the countries could not pay off their debt, we insisted that they privatize their water systems, their sewage systems, their electric systems.

Now we’re seeing that same thing happen in the United States. Flint, Michigan, is a very good example of that. This is not a U.S. empire, it’s a corporate empire protected and supported by the U.S. military and the CIA. But it is not an American empire, it’s not helping Americans. It’s exploiting us in the same way that we used to exploit all these other countries around the world.(…)”

1 In http://heskevandoornen.com/: EXPLAINING THE ECONOMY.