R. Wray-ren WHY ARE WE GATHERED HERE? Remarks Made at the 13th International Post Keynesian Conference1

Prof. L. Randall Wray speaking about his intellectual journey @UMKC as he retires after 17 years of service. 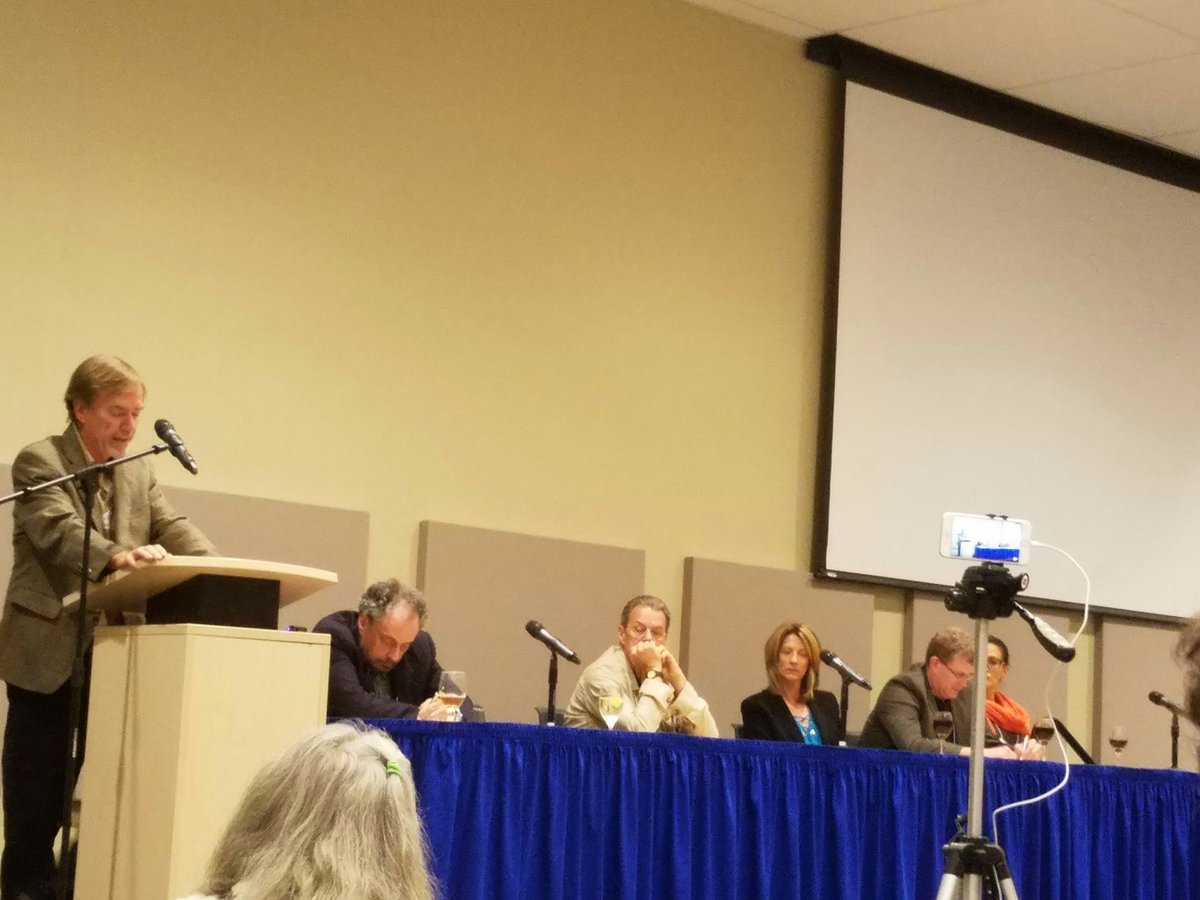 FYI for everyone . . . Randy didn’t retire from being a professor/scholar. He retired from UMKC and went to the Levy Institute. He’s still going to be as active as ever, just not at UMKC. This speech was from an event at UMKC, where he has obviously left a tremendous legacy.

3 Ingelesez: “The following text reproduces my notes for my talk on the final night of the conference; I think there is a video of the entire panel that will be posted up on the conference site later

This conference is dedicated to the memory of Landon Rowland, a local Renaissance man. You have heard both Robert Skidelsky and Chancellor Leo Morton speak of his accomplishments.

Over the years, Landon regularly invited Bill Black and me to lunch to discuss our view of the state of the world. We’d meet at a local restaurant where all the wait-staff knew Mr. Rowland by name, and knew where he wanted to sit and what he liked to eat.

He’d praise the work of our department and ask how the university was treating us. Well, we don’t have to go into that now, on this joyous occasion. He always promised to put in a good word with the Chancellor. I’m sure he did.

He was a major contributor to the last three meetings of our conference. He expected nothing in return but stimulating presentations.

His generosity and enthusiasm were critical to the success of the last conference and to the existence of this one. I was ready to hang it up. He and Lord Skidelsky conspired to talk me into one more. Both of them found funds to ensure there would be a conference in 2016. Robert paid the costs of setting up the internet site. Landon paid the costs of bringing in the Keynote speakers. Unfortunately he couldn’t be with us tonight.

I talked to him through his illness. He was always upbeat. He learned all he could about his rare affliction—that dated back to his youth when he was exposed to asbestos while working in maintenance in the apartment complex where he lived with his family after his father’s death. He embraced alternative, radical, cures and was happy to be the guinea pig. When he thought it was time to get an assistant to help in some daily tasks, he asked for an economics graduate student.

For the intellectual stimulation.

That’s a rare individual who would seek out a budding economist for scintillating conversation. Most people would rather have their teeth drilled.

Landon had a long life, but it was cut too short. I know he would be especially happy to be here tonight, as we celebrate the UMKC economics department’s contributions to heterodox economics. For those who are interested in a short note about his life, please see this.”

4 Ingelesez: “I want to do some thank-yous, but I also want to explore why we are here tonight. What a long strange trip it has been.”

5 Ingelesez: “First there is Warren Mosler, who stumbled on the old PKT (Post Keynesian Thought) discussion group—I think it was the first online venue that brought together heterodox economists. Without Warren you would not be here tonight, and there would be no Modern Money Theory. That is the unvarnished truth.  Warren brought the reality of the real world to academic economics in a manner that is exceedingly rare. His penetrating challenges forced a handful of us to reinterpret what we knew—what was already staring us straight in the face.

In retrospect, it is now all so clear. It is so clear that our long-time critics now claim that all the essentials of MMT were always obvious to them—no matter how hard they fought against that obviousness.

Sometimes, you are better off at ground level. Warren has that knack of taking down a 10,000 word academic exercise with a simple phrase: taxes drive money; bonds are a reserve drain; government spends through keystrokes; currency issuers cannot run out; the government’s debt is the nongovernment sector’s net financial asset.

That is all obvious to you now. Before Warren it was not. Your head was in the fog.”

6 Ingelesez: “Second, there is Mat Forstater, who had the good sense to recommend Pavlina Tcherneva to Warren when he posted a request for a good research assistant to do a literature search—to find the giants whose shoulders he didn’t need for understanding, but who might prove useful in selling the ideas.”

7 Ingelesez: “Without Pavlina there never would have been the 1996 meeting at Bretton Woods that served as the first conference for what would become MMT. It was titled “A Framework for Macroeconomic Analysis”.”

8 Ingelesez: “Warren invited me and my family. Frankly I wasn’t sure I should go. I wrote to Paul and Louise Davidson, who had just visited Warren at his Florida house. By all means, they said, Warren is a gracious and generous host.

Warren brought together Post Keynesian academics and financial markets practitioners to hammer out the beginnings of MMT—people like Charles Goodhart and Basil Moore, as well as Alex Pollock of the Federal Home Loan Bank, and David Mittlelman and Maurice Samuels who manage Harvard’s endowment.

For 20 years Pavlina has been in the thick of it. She joined Mat and me at the Levy Institute—she worked in the forecasting center—and then she moved with us to UMKC in 1999. The rest is history, as they say.”

9 Ingelesez: “It has been a long strange trip. When we began a bit over 20 years ago, I thought the parameters of the trip were pretty clear. We were borrowing the insights from great minds of heterodoxy to integrate then-current strands of research.

Endogenous money and central bank interest rate targeting; Keynesian theory of effective demand; rejection of the orthodox analogy of a government budget constraint, replaced by an understanding of sovereign currency; repudiation of the notion of a Phillips Curve in favor of an Institutionalist approach to the labor market and wage setting; close institutional analysis of actual operating procedures; and careful examination of the history of money in place of the Robinson Crusoe barter story.”

10 Ingelesez: “None of it was new. It was a conscious integration of all the traditions I had studied as a student...”

12 Ingelesez: “Warren thought it would be easy to win over the entire profession; he thought it would take a few months—maybe a couple of years at the outside. We’d win Nobel Prizes. I was somewhat skeptical. Warren was used to dealing with really smart people in financial markets. I was used to dealing with academic economists with careers and reputations on the line—where being right carries no rewards; (…)

I knew that a repackaging of heterodoxy was not going to go over well with mainstream economists, who would have to reject everything they had ever done.”

13 Ingelesez: “However, I will admit that I thought we’d have a relatively easy time with heterodox economists. I was wildly wrong. To some extent, our belief that it would be easy is what made it hard. We did not always explain ourselves well. We were too impatient. And we got too defensive when we were criticized by those who didn’t understand what we were saying.”

14 Ingelesez: “It took a long time, but I’ve learned that it is impossible to eliminate ambiguity with mere words. No matter how hard you try, it is not what you write, but how it is interpreted that wins the day. This is the new frontier for MMT—how can we elicit the proper interpretation, with the frames that can trigger the right neural connections. No one thinks with her brain (…). To many of our heterodox brethren, it just sounds immoral to say that the government cannot run out of money.”

15 Ingelesez: “I had hoped to have Warren here for this celebration so that we could together acknowledge his contributions to this conference, to the UMKC program, and to revitalizing Post Keynesian economics more generally.

Warren declined. It would have been a bittersweet affair. I’m embarrassed by the way my university and my fellow heterodox economists sometimes treated Warren. I wish we could make it up to him.

He contributed something like $4 million to the effort—supporting the PK conference in Knoxville and after its move to KC.

He supported many dozens of UMKC PHD students over a period of almost a decade. He made it possible to bring many visiting scholars to UMKC to enliven discussion. Our program’s success would have been impossible without Warren.

Again, that is the unvarnished truth. Without Warren, UMKC would still be sitting in the middle of the MidWest. Because of Warren, it sits in the Center of the Universe—to borrow one of his phrases.

He contributed funds to a number of other academic institutions, too. He never expected nor asked for anything in return. This was philanthropy of the highest order—to advance understanding.”

16 Ingelesez: “Lastly, I’d like to thank a few of the PhD students with whom I worked closely over the years.

I served on Scott Fullwiler’s dissertation committee. He told me he had worked through my 1990 Money and Credit book in preparation. I told him that is nice, but endogenous money is a pretty trivial advance. He had to read my much more important forthcoming 1998 book, Understanding Modern Money. He did. And he’s made major contributions to MMT ever since. He’s now replacing me at UMKC.

Stephanie Kelton wasn’t technically a student but she’s been with me since the Denver days. I don’t have to recount her contributions to MMT, and also to injecting a tiny bit of sanity into American policy making. UMKC remains in good hands.

Back to the students. I already mentioned Pavlina—My student, my friend, and now my Chair at Bard. If you live long enough and have good enough students, I guess that happens.”

17 Ingelesez: “I retired from UMKC as of August 31. It was a good run—17 years here, after a dozen years at Denver before that. I get restless, but I retired mostly for family reasons. I thank my colleagues and students for the good times.”